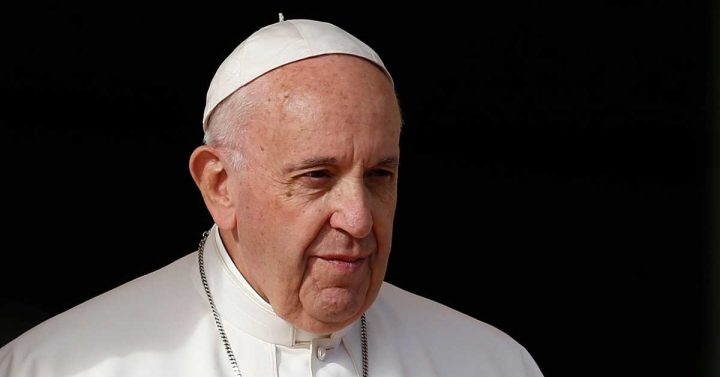 UPDATE: This morning, July 21, 2021, Bishop McKnight issued a formal statement in response to the motu proprio. Essentially, he is allowing the TLM to continue while he “consults with experts in canon law and other disciplines.” He also appears to have abolished the office of the Bishop’s Delegate for the Extraordinary Form, referring to it as “former”.

Bergoglio has spoken. Through his motu proprio, Traditionis Custodes, the immemorial Usus Antiquior Mass, enshrined forever by Pope Pius V, is summarily banished from the parish church—you know, that place where “all are welcome” . . . except, of course, those of us who are  “rooted in the previous form of celebration”. In other words, the disobedient.

As I write this, I assume His Excellency W. Shawn McKnight is still mulling over how the motu proprio will be implemented in the Diocese of Jefferson City. While an official statement is yet to be released, he has missed a timely opportunity to directly address the concerns of his Traditional Latin—excuse me, “Extraordinary Form”—Mass community at our one and only weekly celebration. On Sunday, July 18, more than 100 of us from throughout this vast diocese turned out for what we feared might be our final Traditional Latin Mass (TLM) under Summorum Pontificum. (Ironically, and most befittingly in Bergoglio’s world view, it was held in the school gymnasium as the parish church is undergoing renovation.) Emotional at times, our priest delivered a heartfelt homily sprinkled with “I don’t knows” in regard to what might happen next. He asked that we pray for him and the bishop as they discern next steps.

And so I am praying.  I am also discerning what I will do when the inevitability of “Novus Ordo Mass Only” takes hold. I implore you to do the same, because it is a matter of eternal life and death. And it all hinges on true obedience.

I have read and re-read both Traditionis Custodes and its cover letter to bishops. I have so far watched countless hours of podcasts and read numerous articles analyzing the content of these documents, including this and this. And what bothers me most is not that Bergoglio has closed the church doors to the TLM. After all, we “rad trads” are rather used to being segregated. Rare are the occasions when I have been able to attend TLM in a traditional Church setting! We are either relegated to dilapidated, formerly Protestant churches in bad areas of town (the typical setting for FSSP parishes in my experience), or we are begrudgingly allowed to “borrow” a Novus Ordo parish church, where the altar must be completely reconfigured and a makeshift communion rail fashioned—and both must be returned to Novus Ordo specifications—for each and every Mass. So be it.

No, what bothers me most about Traditionis Custodes is its charge that TLM Catholics are disobedient because we reject Vatican II and its liturgical reforms. Indeed, Bergoglio orders each bishop to forbid celebration of the TLM, even if takes place at the city dump, if said bishop has reason to believe we are thumbing our noses at Vatican II and the Novus Ordo Mass.

In what seems a veiled attempt to stave off any kind of litmus test on the practicing faithful, a number of pro-TLM commentators have gushingly insisted that virtually all TLM Catholics embrace Vatican II. The implication is that a few bad apples still cling to the pre-conciliar Church, but not nearly enough to pose a threat. I strongly suspect the opposite is true. Bergoglio is spot-on in his assessment. Virtually all of us are guilty as charged. Or should be.

In my view, we are perilously late to the party.

I have come to believe Archbishop LeFebvre was prophetic in staunchly rejecting the Vatican II reforms that brought us the Novus Ordo Mass. He was courageous in protecting the TLM to the point of his excommunication in 1988 (and was posthumously vindicated when reinstated under Pope Benedict XVI in 2009). Would that all faithful Catholics had followed him back then, as did the followers of St. Athanasius who was excommunicated for upholding Christ’s divinity against the Arian Heresy in the 4th century. In both cases, these men were obedient to God and not to the error of man. In both cases, these men preserved unchangeable Truth. In the case of Archbishop LeFebvre, it seems we have failed miserably to heed the call.

For decades, TLM Catholics have been counseled to accept ambiguous Vatican II teachings and their steady erosion of both liturgy and Church teaching. We are directed to call the Novus Ordo Mass “Ordinary” and the Usus Antiquior (the ancient usage) Mass “Extraordinary”, which makes no sense! We are told they are merely two, equally valid and desirable forms of the same rite, when the newer form was clearly intended to obliterate the old.

In the name of “obedience”, many of us have wrestled with fitting the square Vatican II peg into the unchangeable and perfectly round hole of Church doctrine. And to what end? The Novus Ordo—the New Order—in keeping with the “New World Order” orchestrated by global elitists including Bergoglio.

Lest we think otherwise, Bergoglio has literally just shown us the door. And in doing so, he has facilitated the removal of scales from my eyes. I now stand on the threshold to the future of the Catholic faith, empowered by sound, rational teaching expressed here by a knowledgeable and holy priest. He explains better than I what is meant by true obedience.

I urge you to click through and listen attentively. You will learn four types of obedience, with back-up from St. Thomas Acquinas, described as best I can here:

God help me if I’m wrong, but Traditiones Custodes has opened my eyes to number 4, above.

4 thoughts on “True obedience is not blind. A response to Traditionis Custodes.”